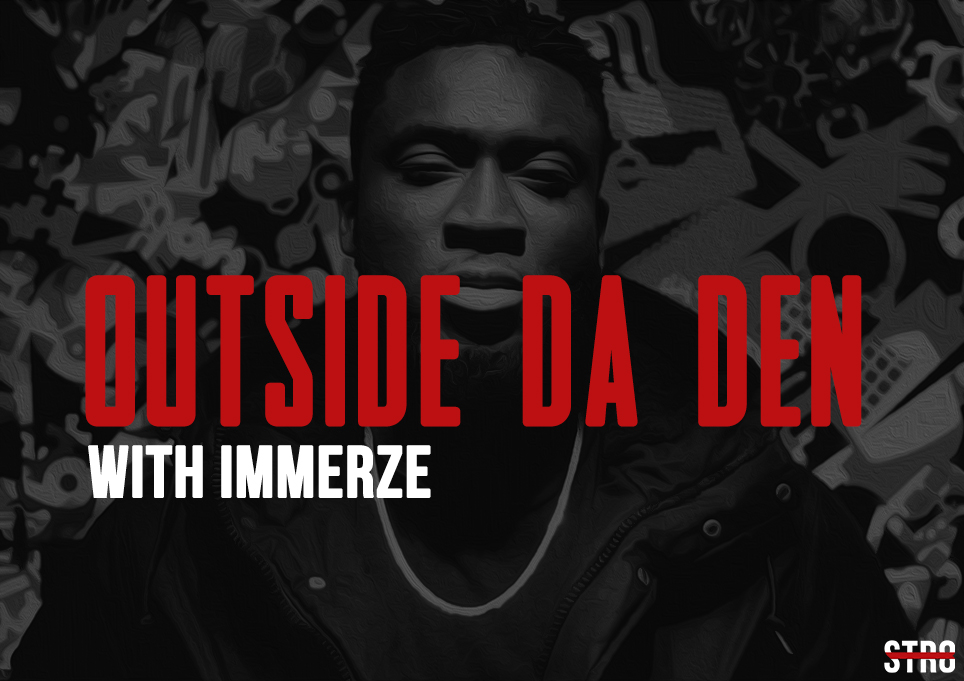 Go Outside Da Den with the Vancouver native.

We’re back for another installment of our Outside Da Den series, where we have a personal one on one with your favorites emcees you know or need to know.

This week catch up to Vancouver native Immerze. Read as he brings us up to speed on new projects, his rebirth and more.

We first came across your music back in 2014 with the “4500KM” visual. Prepping for this interview I went back to watch that clip and noticed that it wasn’t there anymore. What do you remember about your music back then? And what happened to video?

First off thanks for the opportunity and supporting me all these years, I really appreciate it! Yes what happened with that video is the wrong audio got uploaded and one day I was just going through videos and the sound was too distorted for my comfort so I just deleted the video. My music back then was definitely in the learning stages, I feel that was the time I was understanding making music is more than just writing witty bars over a dope beat and around that time I was beginning to explore making more emotionally charged records. By that I just mean expressing myself more on wax rather than hiding who I am behind bars.

Around that same time, I believe you mentioned being on tour with Kendrick Lamar and Kid Ink. What did you learn from that experience?

Yes, I actually did my first show opening up for Kid Ink, so it was Dope to share the main stage with those guys. It was a festival in Philippines called 7107 International Music Festival. There were a bunch of amazing acts; Red Hot Chilli Peppers, Kaskade, Alvervo, Motherbass a group based from Manila, it was great. I learned A lot! I learned music is a universal language, when you see 1000’s of people jumping to your music just off the vibe, its a beautiful thing to experience. Also how important being punctual at these big events are. 6:00am sound check means be there by 5:45am just like any other job. And lastly gotta be prepared overall, you never know when an opportunity may arise so you gotta be on your toes for when the time comes.

Not originally, I was born in Toronto, Raised in Hamilton and moved to Vancouver a little over 5 years ago now.

Is there a hip hop scene in Vancouver ? If so how would you describe it?

There’s most definitely a hip hop scene in Vancouver. Not as big as Toronto of course, but there’s definitely talent here. I would say the scene here is like a huge garden with rare seeds planted throughout. But for an outsider at first glance it just looks like a big patch of dirt with a few budding plants. Only the ones who are a part of the garden know what kind of amazing plants will grow in due time. LOL, those seeds would be, Brevner, Jay Kin, SoLOKI, Seth Kay, Spotty Josif, Dave Fields, NWD, Twest, Billionaire B, Lazievil  Stevie Ross, Tom MacDonald, Kai Skywalker, Ghost and those are just a few names of many rare seeds growing in Vancity.

With the success of other Canadian artist like Justin Bieber, Tory Lanez, The Weeknd and of course the obvious one Drake, do you feel pressured to continue that narrative?

Not at all. Its actually amazing what those artist have accomplished and their spotlight shines on the whole country, although for now the light is shining HEAVY on Toronto! Rightfully so. Canada has a lot more to offer than one city. The music I’ve been trying to create is a reflection of me and if I do my job right, it shouldn’t sound like anyone else  because everyone is unique, i’ll let Drake rap like Drake and Future Rap like Future and Immerze Rap like Immerze.

Now I will be honest, we posted plenty of your music in the past, but I think what really caught our attention was Dayton Spokes LP. First off are you a car fanatic? Where did the idea of naming your project Dayton Spokes come from?

Dayton Spokes was a breakthrough for me personally, that’s were I started to apply all I’ve learned and that’s what came from it. Also at around the time Rich Kidd (Toronto) was like a mentor to me. He was giving me a lot of game and I soaked it all up. I’m a car fanatic that don’t know enough to call myself a car fanatic lol. I just love the ascetics of dope cars. The reason I named it Dayton Spokes, is because when you look at the rim its full of intricate bars that tie in together to make one whole thing, so with the project I felt like I laced all these intricate bars into one song and to me the comparison made sense plus I liked cars so BAM Dayton Spokes.

You lived with that project for about a year and a half until releasing Room 221. Now I know we are in a “gotta have it now” society. So with that being said what took so long for you to release new music?

Yes, the real reason is I didn’t get the response I was expecting from Dayton Spokes. I felt it was great work and so did my peers. I figured I’d step back and learn from where I messed up and once I felt I understood what went wrong I was already working on the next tape “Room 221”. The reality is I’m still a nobody in the game so that would be the ideal time to be patient and just learn and experiment with ideas.

Toward the end of last year you kicked off Oreo Flow Fridays. We here we’re huge fans of those freestyles and look forward to hearing something new from you week to week. What was the genesis of that series? Is it something you plan to bring back?

Thanks! It started a week after I got out of the hospital. I had to removed a major organ and while was in my hospital bed I really felt like I wasn’t going to rap no more and that I gotta find another path for myself. Before I was able to leave the hospital, I snapped out of it and told myself I haven’t been working hard enough and that I’m going to just snap and wake people up! I feel like it did the job…people were catching on! And most definitely I’m going to be bringing it back very soon.

A couple of weeks ago you hit us with a new single, “2 CENTS” and announced that you had a new project on the way titled Before I Go. Tell us about the project and why you chose to lead with a single titled “2 CENTS”?

Yes yes yes! This whole project is just another personal milestone for me. I like to say that this project is a conversation with the listeners I say my 2 cents and u can reflect yourself on the rest of the record and vibe with it. I didn’t say too much, but I said enough that there are no holes in story, “2 Cents” was the first single because it embodies the whole tape and sums up my artistry.

What should we expect from Before I Go that’s different from Room 221 and Dayton Spokes?

For starters its sonically different, whereas Room 221 was on a dark erie vibe Before I Go is on the other end of the spectrum, its fun but the content is still deep.

Is there an expected date yet?

What is one thing about you that your fans may not know?

That I just brought back Jheri Curls LOL.

I want to thank Str8OutDaDen for all indie artist for giving us an outlet to give more than just music to the fans and shout out to everyone supporting the movement Before I Go is going to be #BIG!