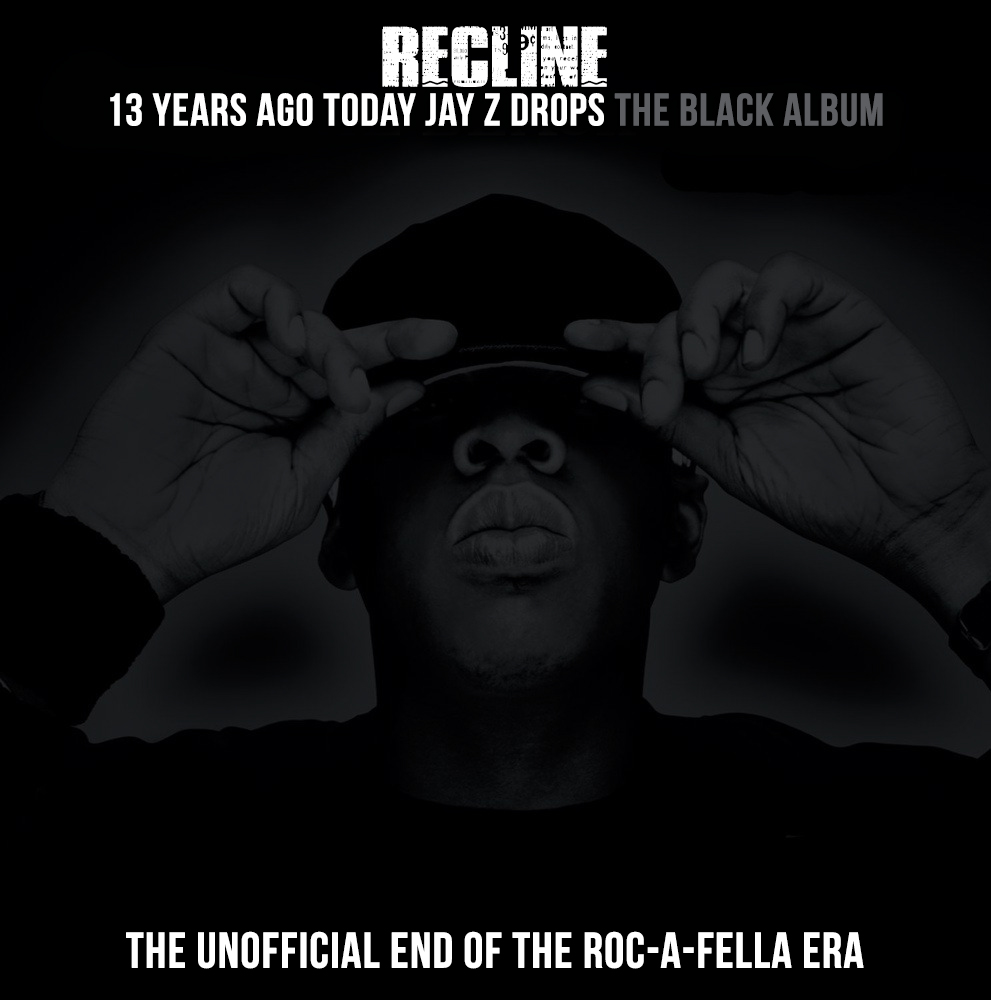 The unofficial end of the Roc-A-Fella era.

Thirteen years ago today we saw a bitter sweet end to what is considered one of the best era’s in hip-hop. I like to call it the Dynasty era. Roc-A-Fella Records was on top and seemingly everything that came out of the camp went at least gold. JAY Z said that he wanted to face a new challenge in his career and that this would be his last album, The Black Album.

The concept would be Hov locking in with all of his favorite producers, with each one producing one song on the album. At the time that was Dr. Dre, DJ Premier, Timbaland, The Neptunes, Just Blaze and Kanye West just to name a few. Now somewhere along the lines that idea changed as Just Blaze, The Neptunes and Kanye managed to work on the bulk of the album, while subbing DJ Quik and 9th Wonder for Dr. Dre and DJ Premier.

Nevertheless JAY Z turned in a classic album, one what many thought to be his last. Now we know now that didn’t stop Hov as he released his “comeback” Kingdom Come in 2006 and three more solo projects afterwards (American Gangster, The Blueprint 3, Magna Carta Holy Grail).

Back to our original thought…the end of an era. Roc-A-Fella in the way we viewed it as fans was over. No more Dame Dash, no more Biggs, State Property were scattered, Dipset was holding their own and Memphis Bleek was working on pushing his Get Low label. As for JAY Z, he was enjoying “retirement” by taking a seat at the table as Def Jam’s President in late 2004.

Roc La Familia divided. No more happy home. The music dried up and things just felt weird from then on out. Now of course we can speculate on what really caused the break up. My guess from everything gathered through the years was this; JAY Z wanted a new start.One that didn’t include his old friends and business partners. He wanted to separate himself. He wanted to make moves that pushed him to the top of hip-hop.

Do we miss the Roc-A-Fella of old? Of course. I think about it all the time. Here’s a real question for you though. Is JAY Z the same JAY Z of today without that move? Let me know in thoughts, but in the meantime recline back and enjoy The Black Album again below.

Dante Delivers Bars A Bit “Off Topic” For New Single