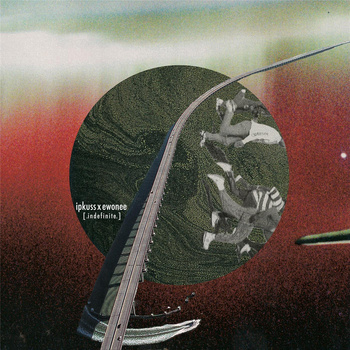 Peace to all, I’ll be reviewing Indefinite by Bay Area native Stanley Ipkuss. This may be a personal favorite of mine not just because we both have work with Ewonee the beatnik or because I personally have a record with Ipkuss, but because of his love for lyricism, imagery, and smooth cadence. This is a 14 track EP produced in its entirety by Ewonee the Beatnik, who hales from Mt. Vernon New York. That alone is what kept me on edge about this project; because it is always unique and can set off your spidey senses when you see two artists from two different time zones connect and build chemistry the way these two have. I connected with Ewonee through SoundCloud and he shared the track these two have together called “Caffeiene” which drew me to Stanley. Anyhow, lets dissect this piece of work.

This album opens with the song “Sskpylnts” which is a great intro to an audience who may not be familiar with his work. The beat begins with a soulful sample that transitions to what is more of a lo-fi feel that reminds me of a track from Blu & Exile’s “Below The Heavens” album. His choice of words and the way he puts them together is admirable for any emcee of his caliber because it lets you know who Stanley Ipkuss is but also gives you an image through song, which in my book is the best way to do it because you let people feel where you come from. One line he says that was cold to me but has a deeper meaning is “phantom of the night time a vandal at day break” which explains his love for art, graffiti, and skateboarding. If you know anything about this scene you know it is risky and adventurous so he reeled me in with his cinematic honesty. You also get songs like “Dee.Bagg” ft. Doof who is actually from my town Richmond Virginia, “Letters” featuring Bukue One, and “Caffeine”, which all lay in a realm of there on and set different tones for the overall idea behind this story. Stanley holds his weight with those who are featured and can speak to anyone in the Blue Collar, or White Collar work industry on “Caffeine”. With the hook which says “I need caffeine or ill decline, seeming like its about that time, for a coffee and a cigarette, I need coffee and a cigarette, outside to forget the stress, chug one down ash it in the dirt, now its time to get back to work”. If that chorus doesn’t speak to you in volume then you must love your job.

Now there are a few things that let me down with this project. I personally am a greedy consumer, and this project was too short to be this dope. Granted, it is an EP so it served its purpose but in todays age you want to give as much as you can to the world to not be forgotten by next week. The other thing was the overall theme based on the beats. The beats all have similar sounds as if Ewonee chopped the same sample various ways which can be a let down for some, but for a fellow emcee it’s a plus because it adds cohesiveness to the project however, this can scare away a potential audience who feeds on variety. Sadly, lyrics just aren’t the top priority for people’s ears nowadays.
Overall, I have a lot more to say about this project but as an emcee and an enthusiast in this culture I could type until my fingers hurt so I’ll leave you with this. If you want to have something to play in your car, work out to, listen to on your iPod when Mom and Pop don’t wanna hear that “rap, because back in my day” type of ish this is it. If I were to rate it out of 5, I would give it a 4.5 only because of the length and beat selection. Until we meet again world.