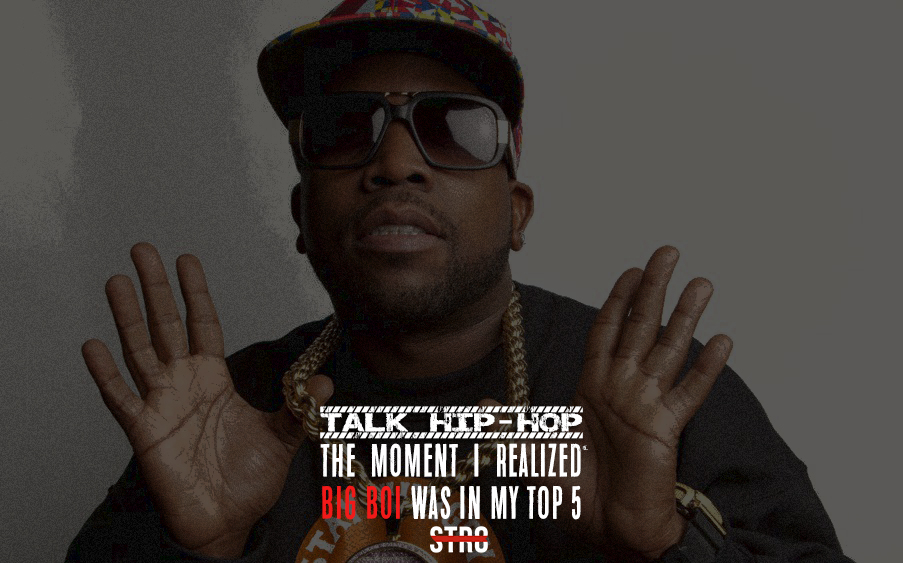 How Daddy Fat Saxx aka Sir Lucious Left crept up my list.

Now before you get all tight, this is not one of those typical top 5 conversations at all. For those of you remotely close to my circle or if you pay close enough attention to my tweets, then you already know that Outkast is my favorite group of all time. Not to mention they created the best album in Aquemini and have one of the best catalogs of music bar none (this is not up for debate, sorry fight me).

At some point in time you’ve probably heard me say that Andre 3000 is number one on my list and I could care less if he’s never officially dropped a solo album. He will always be at the top in my book. From there my list normally would go JAY Z, Common, Pac/Biggie (I always tend to put them together) and my number five would fluctuate between Eminem, Scarface, T.I. or perhaps Lil Wayne. That’s until maybe a month ago.

Here I was the biggest Outkast fan there is (in my head of course) and Big Boi was nowhere on my top five. The sad part was I didn’t have an excuse. It wasn’t like his lyrics didn’t appeal to me or I didn’t like his beat selection. What exactly was it? My initial thought was that I’m such a huge fan on 3000 that I simply forgot about Big Boi. Selfish I know, but then I went back and started listening. Man I was dumbfounded.

Big Boi flow patterns were ahead of its time. He’s the complete opposite of Andre. Stacks found the pocket and never left. Big challenges the pocket on every flow and forces you to rethink how rappers should rap. And if we’re being honest a lot of rappers today borrowed that formula. Big Sean, who is one of my favorites right now, definitely is an offspring of Big Boi. Even Kendrick Lamar reminds me of Outkast at times.

Should I go further? How about we break down one of my personal favorites from Antwan André Patton, “ATLiens“.

Read “ATLiens” by OutKast on Genius

We really can just stop at the title of the song. That’s the first thing, but if we dive into these verses we quickly realize Big Boi gave us some much lingo we still use to this day, with the most popular one being “Cooler than a polar bear toenails”. Big also takes some time to pay homage to Rakim while giving us some life long gems in the process when he says “it’s not where you’re from but where you pay rent…Then I heard it’s not what you make but how much you spent”. Mind you we’re still in the first couple of bars of the first verse.

Now I won’t take the time to break down anymore verses, but what I will do is challenge you to take a closer listen to his catalog. But this time around listen at that cadence and ask yourself does it sound familiar? Break down those lyrics for yourself and read between the lines. After all of that ask yourself does Big Boi deserve that top 5 slot?

Of course I know music is subjective. Some people will chew up this article and spit it out telling me about all of the other artist that I overlooked. One thing to keep in mind is that I’m from the south. And even though Dre uttered the words, Big Boi also proved that the south got something to say.