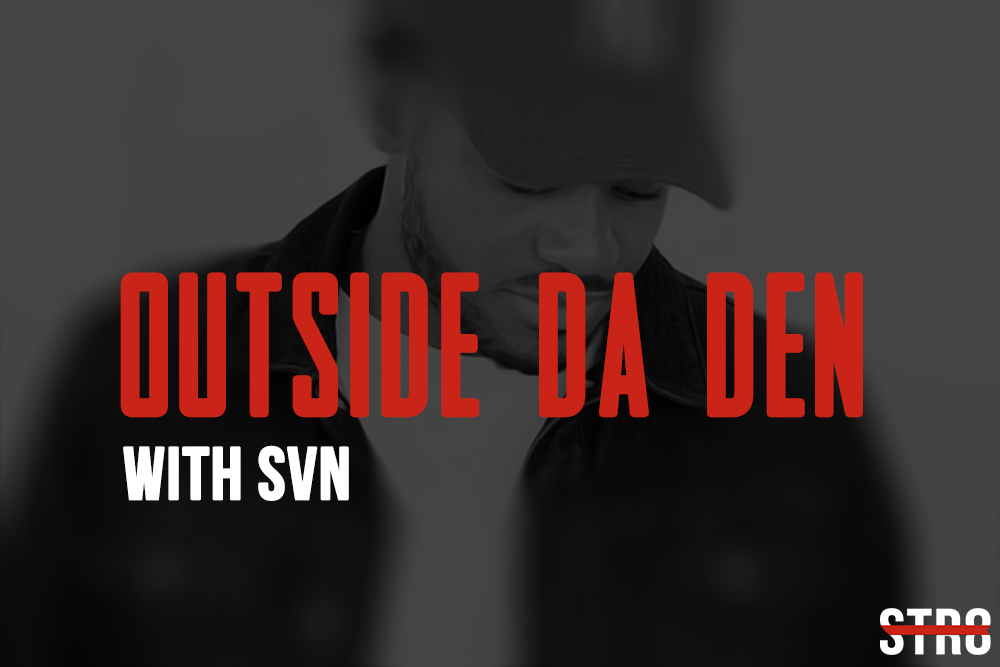 We sit down with the Texas native for the rebirth of Outside Da Den.

Sometime last year we thought about kicking off a new series we like to call Outside Da Den. Now somewhere along the way we completely fell off with that concept. Well now its back and here to stay and what better way to kick things off than with Texas native Svn.

We first came to know this guy on his single “Justine Skye” back in 2014, but didn’t really catch on the wave until his Sunday project a year later. With a new album titled Second Sunday on the horizon, he takes a break from creating to sit down with us.

Before we get started, I want to get the most obvious question out the way. What is the meaning behind your name and when did you start going by Svn?

My name comes from the year my dad went to jail, which was 1997, plus I always was drawn to the number and it’s different meanings across the different cultures. I used to go by Jamie Ariel Hancock then Jamie Hancock. My biggest reason for changing was because I realized that I wanted to express my story with a different persona similar to how Bruce Wayne fought crime as Batman. It’s bigger then just hiding identity, it’s a way to process thoughts you normally wouldn’t process under a certain persona.

I was introduced to your music on the Sunday album you put out last year. What as the thought process going into that project?

During Sunday, I was just straight rapping. Wasn’t focus on catchy hooks or telling my story, just wanted to say the most lyrical things over dope beats. I think I found my sound as far as production wise on Sunday. I was in a good place mentally, life was pretty good. Not to say it’s not good now, but stuff defiantly changed following the release of Sunday.

You mentioned that your style is a mix between UGK & Outkast. When did you first hear their music and what moment did you realized that you wanted these two great duos to be your influences?

I heard UGK before I heard of Outkast, of course haha. I’m from Houston, UGK was like royalty in Texas as a whole. The way Pimp C delivery was on tracks was unmatched and Bun B lyrical ability was ridiculous. Then one day I popped in that ATLiens by Outkast and was snatched into a whole different world. I’ve always been different so being influenced by Outkast was easy and being from Houston made The influence of UGK even easier, so when I approached rap I wanted to keep Houston in my core but be able to take it to the masses so I just studied and combined them all.

I read that you first freestyled in middle school. Do you remember those bars? Explain that reaction that you received.

Man, I don’t remember the bars but I do remember it being in 7th grade in my pre-ap Science class. My homie started beating on the table and I started going, the homies was gassing of course. I’m sure if I can hear myself I would of pushed myself off the chair out of embarrassment.

When was the last time you had that same feeling you had when you first picked up the mic?

Never really had the same feeling, now I’m at a point where everything is strategic moves. When I first picked it up it was all fun all love, not saying it’s not that way now, but now I’m doing it to try and make sure it’s my career. That it becomes a base for me and my family. Trying to let it take me to places most are afraid to go, because the work getting there to hard.

I noticed that Sunday is the only project that you had up on your Soundcloud. Is that your first project or do you have some earlier music somewhere floating around the net?

Yea man I have a bunch of stuff floating on the Internet; Robots7Lions, Kings-FULL, Wherethelionslay and Alpha EP which was the demo to Sunday. I have a bunch of other stuff just can’t remember the names. My first ever song was on Aaliyah’s “One In A Million”. After I dropped a girl hit me on MySpace and said she wanted to be my groupie but way more nastier.

Let’s shift gears a bit. You recently released a new single “9000 Bissonnet”. It’s the first thing you dropped since your Sunday LP. In a world that everything is all about instant gratification, how are you able to do the opposite and take time off between projects?

Honestly life, I’m still a building artist so I have real life issue to handle and things I have to take care of behind music. Plus I wanted to give people time to catch up, to have something to keep listening to and finding new things in it they like.

Second Sunday is on the way. What can we expect on this project? Is it different from Sunday or is this more so of a continuation?

Second Sunday sounds like Sunday big sister! Haha imagine the cute girl you see at school, you like her, she groovy, funny all the things you like. But then you see her big sister come pick her up from school and you instantly fall in love. That’s Second Sunday. But I will say Second Sunday more personal. Highlighting personal event in my life that made me who I am today.

Who’s on your wish list of people to collab with?

Man let me see; D.R.A.M, Mick Jenkins, Earthgang, Isaiah Rashad and Chance The Rapper. A bunch more but if I had to keep it top five those my top five. Of course Kanye, Outkast, Bun B, Scarface and so on, those should be known without said.

What is the biggest misconception of Svn?

I’m not from Southwest Houston; I’m from Southpark. DEA! Dead End Texas. But I know I dropped a track called “9000 Bissonnet” it’s my fault. But ah Southwest show love and Southpark getting a song my first album. Off rip.

What is one thing about you that your fans may not know?

I love them. Seriously! Another would be my favorite movie of all time is “The Warriors” if you want to give me a gift anything warriors related will work.

Be on the look out for Second Sunday. Love me now or love me later, all that matters you considering loving me.