"Dr Phil" Rapper Exposed As A Racist And Pedophile - Str8OutDaDen.com...Relax and Listen!
EventsFeaturesNews

“Dr Phil” Rapper Exposed As A Racist And Pedophile

you can thank DJ Iceman 0 comments

Anthony DeYoung, the rapper who was on Dr Phil 2 years ago because “He wouldn’t get a job cause it would distract from my music” is in some deep water this morning. Mr DeYoung hit up Robert Anderson also known as Dj Iceman in his Facebook inbox offering “Marketing Services” and when Mr Anderson refuses ,DeYoung went on a tirade which Mr Anderson posted on his timeline. after Mr Anderson posted the exchange quite a few people lined up with stories of Mr DeYoung going on racist tirades most aimed at Wu-Tang affiliate rapper Judah Priest. He even went as far as Threatening Judah Priest (Name Sean Gardner). it also came out that Mr DeYoung is a pedophile who likes to prey on 16 year old girls and has a petition out against him you can see the petition HERE
Here Are The Charges Against Mr DeYoung

Screenshot Of Him Soliciting A 15 Year Old Girl 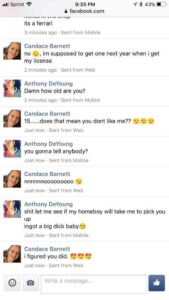 In this day and age with so much going on,Why would someone go to these lengths to get famous?

SOME OF THE THREATENING MESSAGES…..

My coupons. viagra pill My addresses.